A Peek inside the 2020 Harvest Planning

When the world wearies and society fails to satisfy, there is always the garden. – Minnie Aumonier

While the rest of us are trudging through winter with our coat collars up and our hats pulled down, our Aerlume culinary team and farming partners at Fall City Farms met on a dreary, wet January day with dreams and plans for the growing seasons to come.  Executive chef Maggie Trujillo and her team of three sous chefs greeted Amanda Marino and Moriah Sisk of Fall City Farms with hugs; the six have formed a symbiotic bond after more than a year of working together. Before long, the group was full of smiles reminiscing about the delicious produce that Amanda grew last year in her first harvest for Aerlume.

The custom farming operation between Aerlume and Fall City Farms means that the two work together to plan the farm’s seed order and the restaurant menu in tandem, so that Aerlume can commit to fully utilizing Amanda’s produce and find some special items not found in other kitchens. As Amanda said, “We were kind of shooting in the dark last year because we started planning and growing before Aerlume had really opened. This year we get to base it off what we know works both in the field and on the plate, and then add some experiments.”

Amanda and Moriah settled in with seed catalogs and a laptop, while Maggie, executive sous chef Russel Ocsan and sous chefs James Robas and Megan Erickson shared their wish list. Maggie reminded her team, “Remember that some things are both hard to prep and hard to grow so we want to do what is both special and feasible.”  The diverse and passionate group decided to organize the planning by season and began with favorites from the previous year.

Greatest Hits
Amanda found a very special snow pea last year. The Beauregard has a deep purple pod that keeps its color during cooking. It is both beautiful and delicious. The group laughed as they remembered when Amanda shared some potted starts with the team but Maggie gave hers to culinary director, Jason Wilson, because she is a known plant killer. “I think they KNOW. The have figured out what’s coming from me!” Beauregard is definitely a keeper and Amanda suggested a new speckled yellow snap pea, as well.

Maggie and her team agree that Amanda’s arugula is the best they have ever had.  For her part, Amanda talks about the selected variety in maternal terms. “Esmee will always be our girl, but I might try some experiments too.”

Radishes were another hot topic. Amanda is “pretty into all radishes, especially a good old red radish to the French Breakfast.” Maggie agreed and requested watermelon radishes and the black radish. “It looks cool and also because it sounds like a vegan punk band – The Black Radishes.” Amanda reminded the team that some varieties, including purple daikon and watermelon radishes take two and a half times longer to mature so they need to factor that in with menu planning. 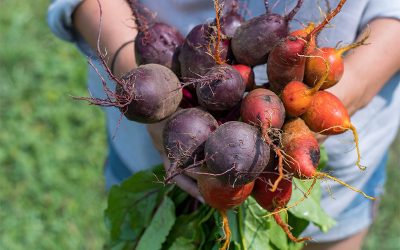 Mainstays like carrots and beets will get into a rhythm to carry the menu into the fall. Sous chef Megan likes the classic Nantes variety. She says the “Bugs Bunny” carrots are super sweet. Amanda and Maggie like the Malbec for its coral red color. Cauliflower is another constant. Maggie says “You can go to town on it! Our cauliflower appetizer is so popular we will easily use 80 lbs. a week.”  Amanda will try a new sprouted cauliflower with a continuous harvest. Cabbage is also used year-round. The Conical or Conehead variety was part of the first crop for Aerlume and is used in Maggie’s kraut, and is also called sweetheart cabbage. She researched it and learned that it is the variety used in traditional German kraut.

Pickles and Preserves
Pickling and canning are a major focus at Aerlume, so Maggie asked Amanda to start planting cucumbers and gherkins as soon as she can for use in-house and for retail sales.  She is also looking forward to pickling habanada peppers and some mini sweet mixed peppers, as well as purple and yellow wax beans for bloody marys. Maggie’s marinara sauce was a guest and staff favorite and she plans to increase production for retail next year. Aerlume gets fabulous varieties of salad tomatoes from Frog Hollow Farm in Walla Walla, but would like Amanda to focus on heirloom and beefsteak varieties for the Aerlume marinara.

Rare and Beautiful Varieties
The very first item requested from the entire team was to bring back the ground cherries. They all love them and are excited to have them back.  Megan eats them like candy and Amanda said that one of the farm hands was like a toddler last year. “There was a huge pile of husks next to her while harvesting. She was like ‘One for you, one for me.’” They grew the Goldie variety and say it is the sweet little sister to the tomatillo.  The Fall City Farms team will take care of removing the husks to save on prep time for the kitchen who plan to use them in salsa verde and chutney, as well as staff snacks.

Fall City Farms’ berries were also a hit.  Megan would like tayberries but they might need to be foraged instead of grown.  Amanda and Mariah can forage salmon berries and blackberries on the farm and will increase their blueberry yield this year. Amanda says that they grew Kiwi berries last year but didn’t share them. “They taste like a gusher – like pre-made jam.” The Aerlume team is eagerly awaiting their first taste.

With a love of all things beautiful and a talent for floral arranging, Amanda and Moriah will increase their flower production this year with a focus on edible varieties and a palette of antique rose colors.  Some favorites will return, including bronze fennel, nasturtiums and coriander seed.  Amanda is also going to grow some decorative plants to bring some of the farm elements into Aerlume’s private dining spaces.

If all of this has you dreaming of starting your own garden, Amanda sources her seeds from some of the following catalogs.  Watch for these and other varieties on the Aerlume menu soon.